“Together: Looking Back, Moving Forward” was the theme of the Alliance for Truth and Justice (ATJ) program which took place on Friday, November 6th. Fairolyn Livingston, award-winning Winter Park historian and ATJ member, served as program host. Gifted songwriter and vocalist, Ruth King, opened the program singing “Strange Fruit.” The song, written by Abel Meeropol, was published in 1937 and recorded by Billie Holiday in 1939. The lyrics protest the lynching of Black Americans, comparing the victims of lynching to the fruit on the trees.

Ruth King’s soulfully piercing acapella rendition of “Strange Fruit” set the tone for the first step in “Healing the Wound”, addressing untold sorrow.  The lyrics flowed from King’s lips as her body gave way to a vivid vocal illustration, “Southern trees bear a strange fruit, blood on the leaves and blood on the root…” Captured by the piercing power and intensity in Ruth King’s melodic voice, it was difficult to hold back tears, as the singer is a dynamic storyteller.

Following the song, local poet Valada Flewellyn, recited her poem, “Skin on the Rope” followed by her declaration, “Save the Country, Ocoee, Florida… This is your moment!” Ruth King  smoothly transitioned into Laura Nero’s song entitled: “Save the County”, and the story continued.

Together, Flewellyn and King, shared their talents, paying tribute to Ocoee’s 1920 Black women with a combination of poetry, prose and song. Flewellyn’s dialogue was based on the research of ATJ member, Dr. Cathleen Armstead and included the poems, “Ocoee Homemakers” and “Grave Issues” both written by Flewellyn accompanied by the music of vocalist Ruth King. “O Father,” “A New Day Dawning” and “Higher than the Heavens” songs written by Ruth King. The tribute portion of the evening’s program ended with King singing: “None of Us are Free,” by Solomon Burke.

A litany of “Watchman” lead by ATJ member Will Jefferson was recited.  The Watchman is a historical figure in African American culture who measures the progress of African American racial justice. The music continued with Ruth King, singing, “Tears of Africa” and enticing the audience into a joyful “Love Train.” It was a richly memorable evening graced by words, chants and prayers from the various religious traditions.

The City of Ocoee Mayor, Rusty Johnson, the Ocoee City Council members along with Ocoee Human Relations Diversity Board members gathered on the stage. Each program participate was gifted a commemorative coin, struck )in antique gold, depicting the portrait of an African American family fleeing from the acts of violence, taking cover in a nearby area swamp after escaping the terror and anger of an armed white mob.  The coin is embossed with the phrase: “Where Suppression is Remembered…Determination Blossoms.”

“Healing the Wound” hosted by the Alliance for Justice, was part of a weeklong commemoration of the Ocoee Massacre, November 1-8, 2020 at the Lakeshore Center in Ocoee.  The commemoration, “A Day of Remembrance, 100 years after the Ocoee Massacre,”  ended with a formal letter of apology presented to descendants of the massacre and a candlelight procession to the unveiling of a memorial marker at Oakland and Lakeshore Drive. The events of the past week mark a historic movement toward healing for the City of Ocoee.  It is hopeful that the healing will spill over into other parts of the state, the nation, the world.  Together: Looking Back, Moving Forward to be continued… 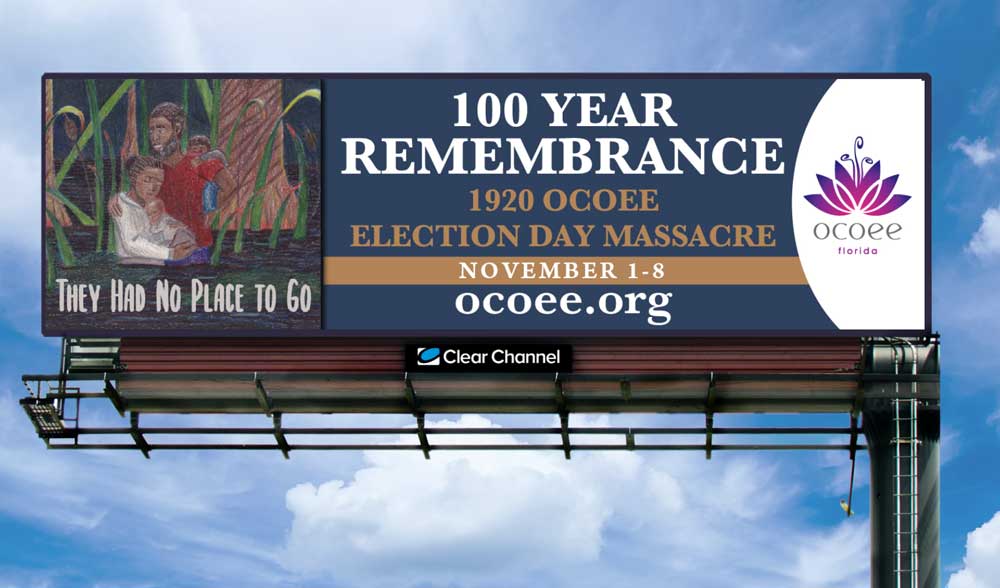