Together: Looking Back, Moving Forward

Two African American men tried unsuccessfully to vote. One was lynched, the other escaped. The town was burned by a white mob. Over the next three days, from six to over thirty lost their lives. This story will be told.

Skin on the Rope

We all have skin on the rope
Whether a neck on the rope
Or a hand on the rope
We all have skin on the rope
The pain of that connection
Grips us, entangles us
Compels us to examine
Our history, then construct
Tomorrow to manifest the
Wounds that need
More than a band-aid
Wounds that warrant more
Than a cursory examination
We must dissect the
Fibers of our history
Inspect our suspect
Moral Consciousness
Which allows sin to fester
As we turn our heads
Away from the atrocities
That grab our children
Drowning them in the muck
Of our making
Leaving them unprepared
Unprotected but infected
Generation after generation
From our refusal to acknowledge
How we have Failed
Our children…All

We ALL have skin on the rope.

Echoes of the Enslaved

Things That Stay With Me

by Valada Flewellyn
Listen
Response to "Things That Stay With Me" 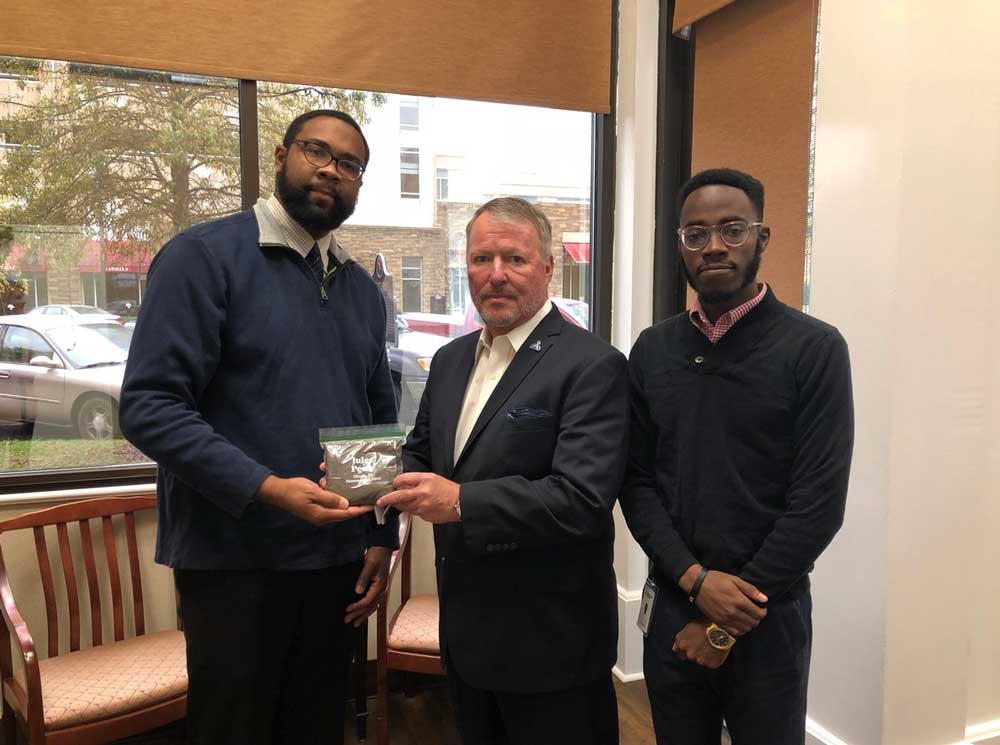 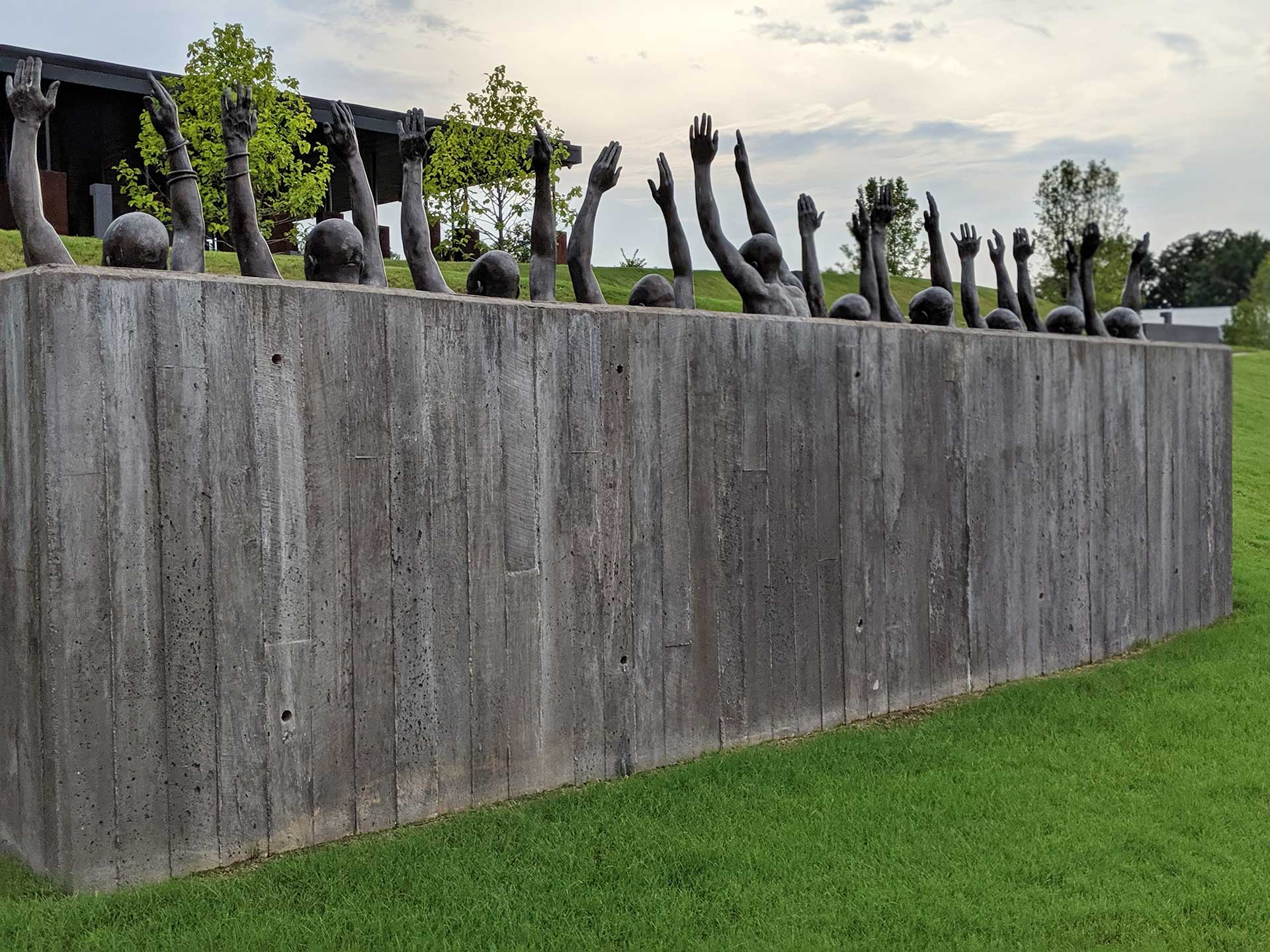 ATJ members travel to Montgomery for EJI museum openings
At least 15 ATJ members attended the openings of EJI’s National Museum for Peace and Justice and the...
Read More

Our Work, In Partnership with Equal Justice Initiative 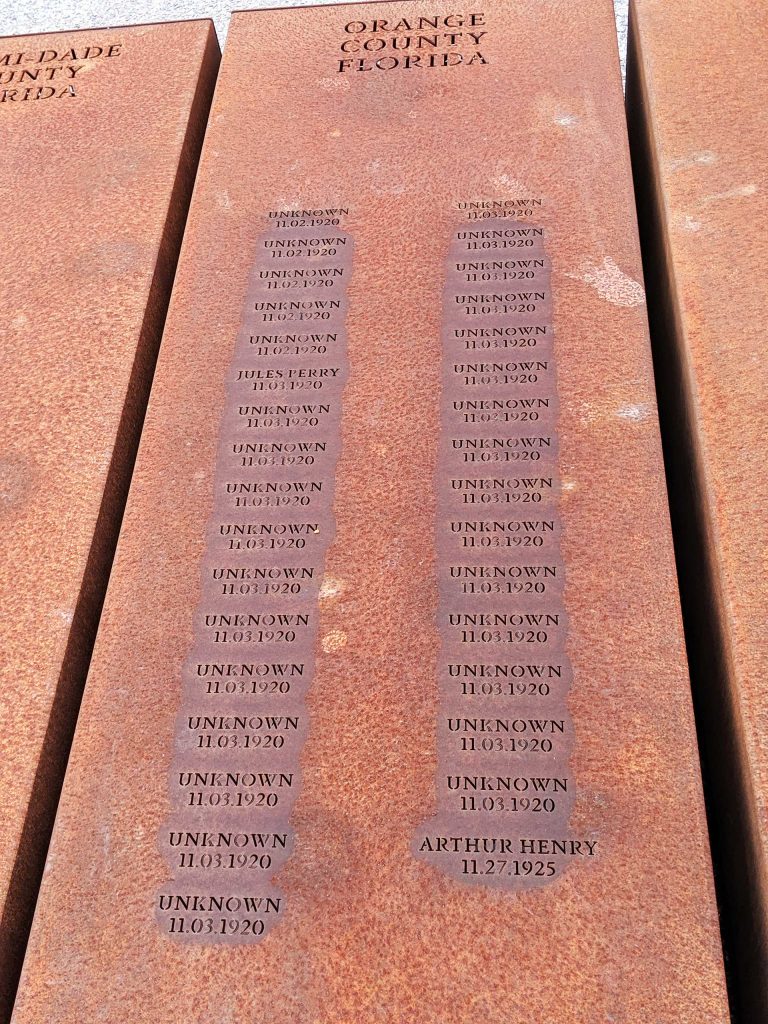 [?]
Requested an exhibition on the Ocoee Massacre 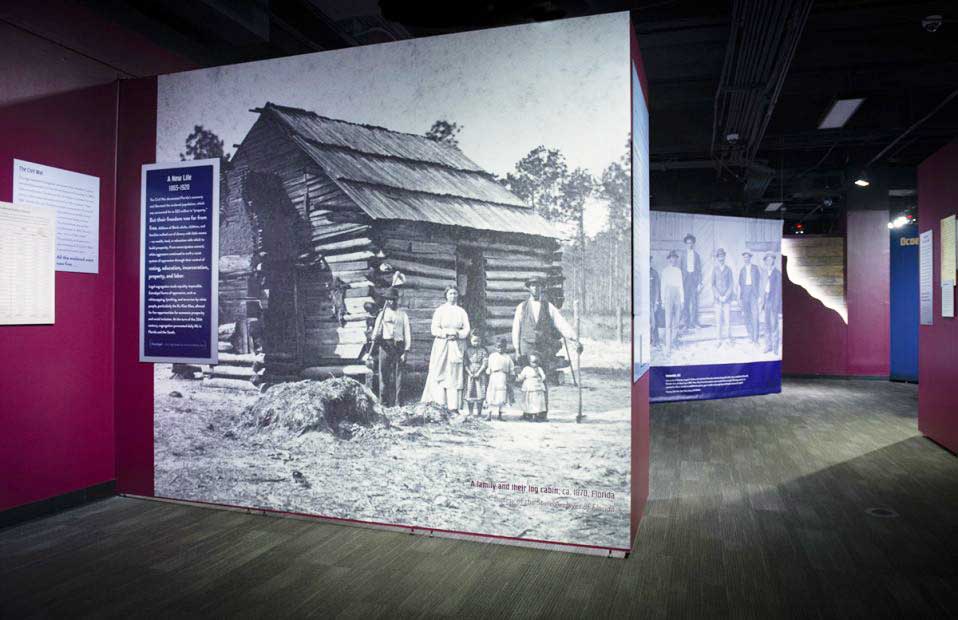 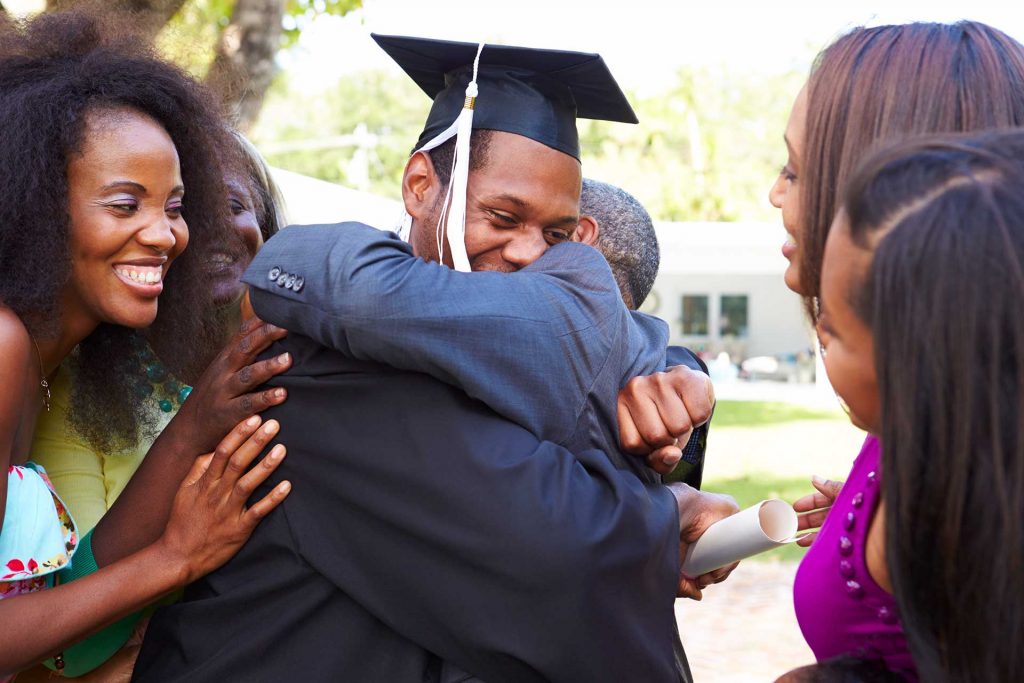 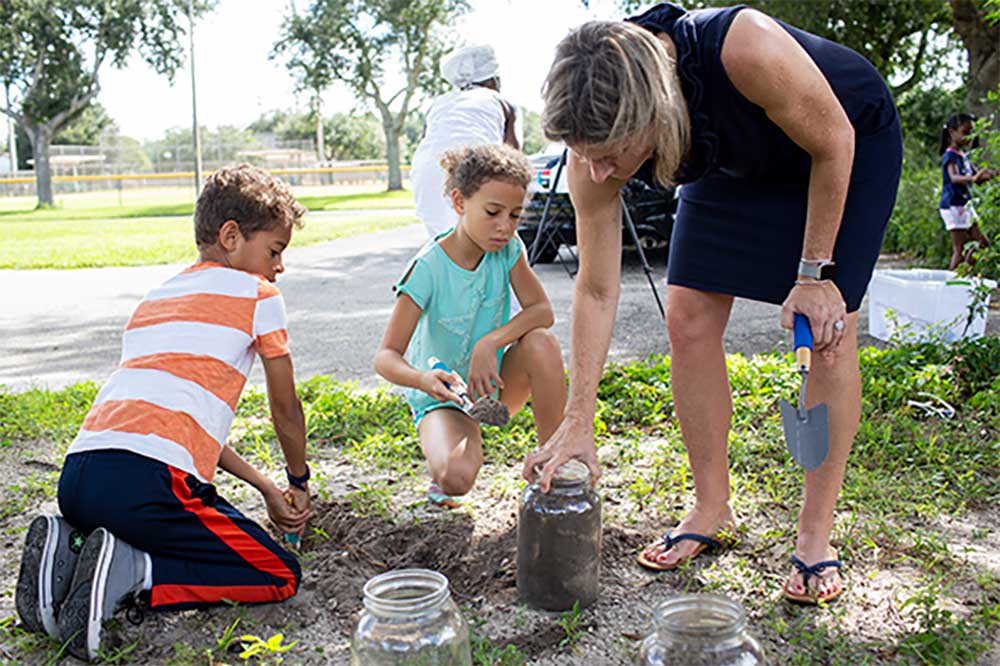 ?
Educate the public on the Ocoee Massacre and its continuing history 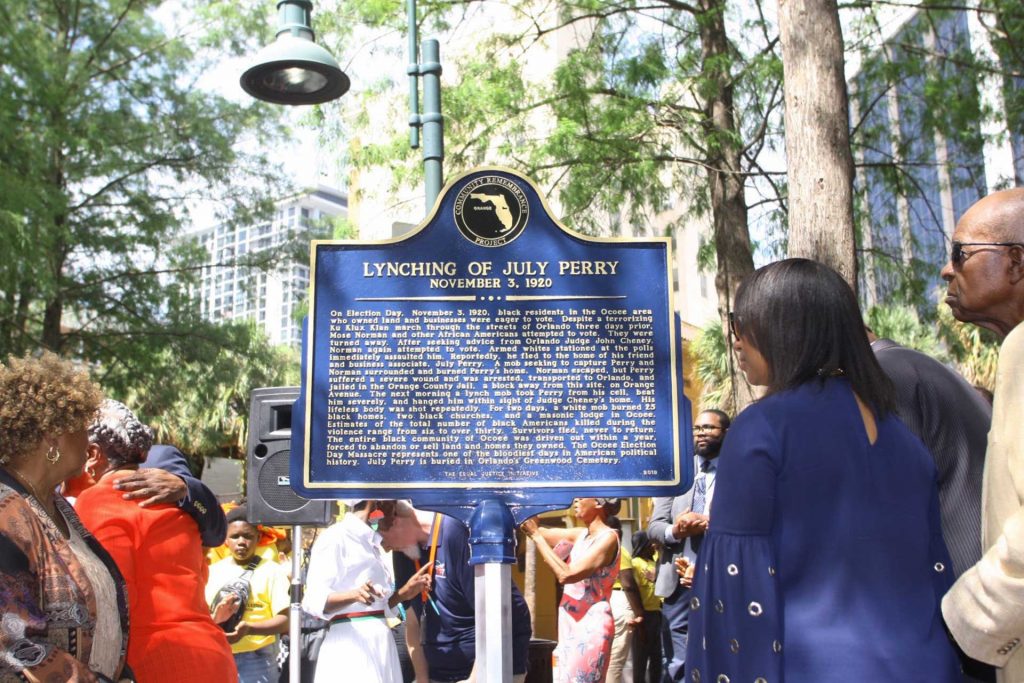 November 8, 2020
City of Ocoee placed an EJI historical marker in their downtown 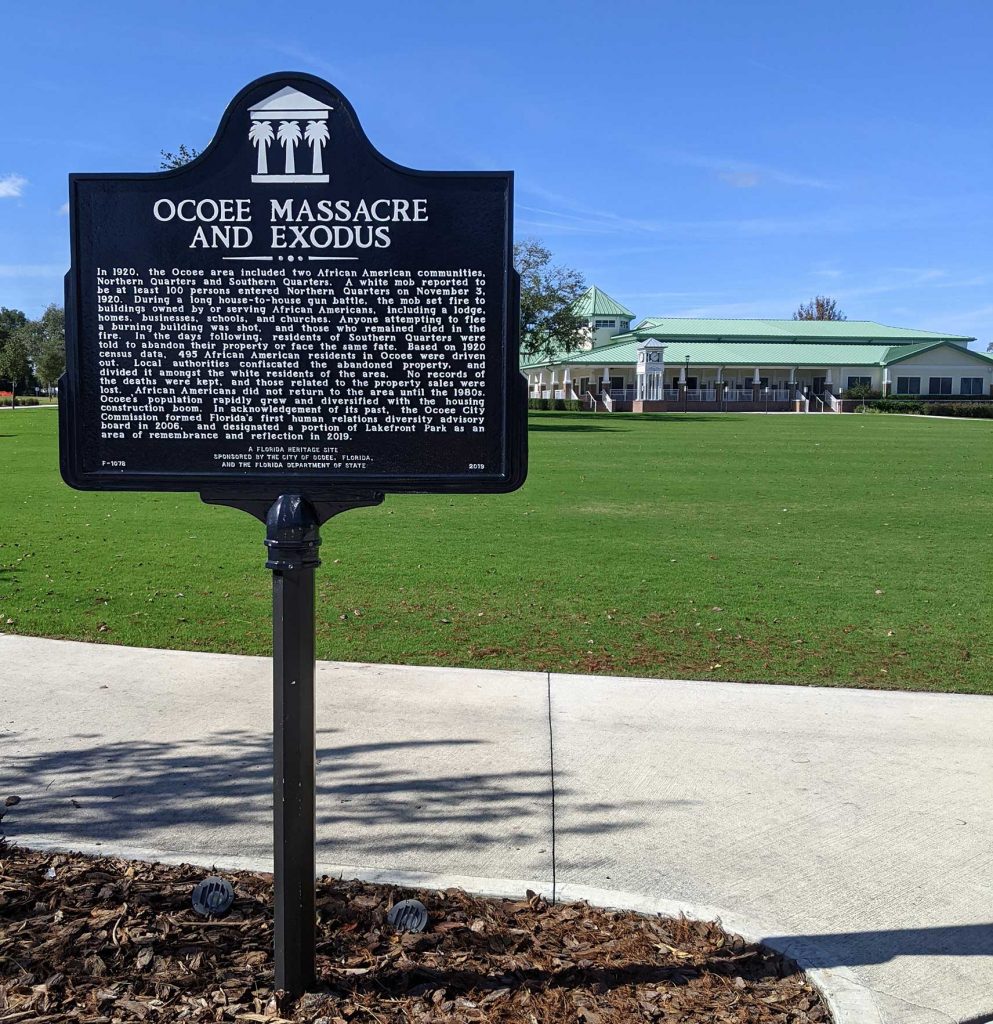 City of Ocoee placed an EJI marker in their  in November 2020 marking the 100th year anniversary of the Ocoee Massacre. 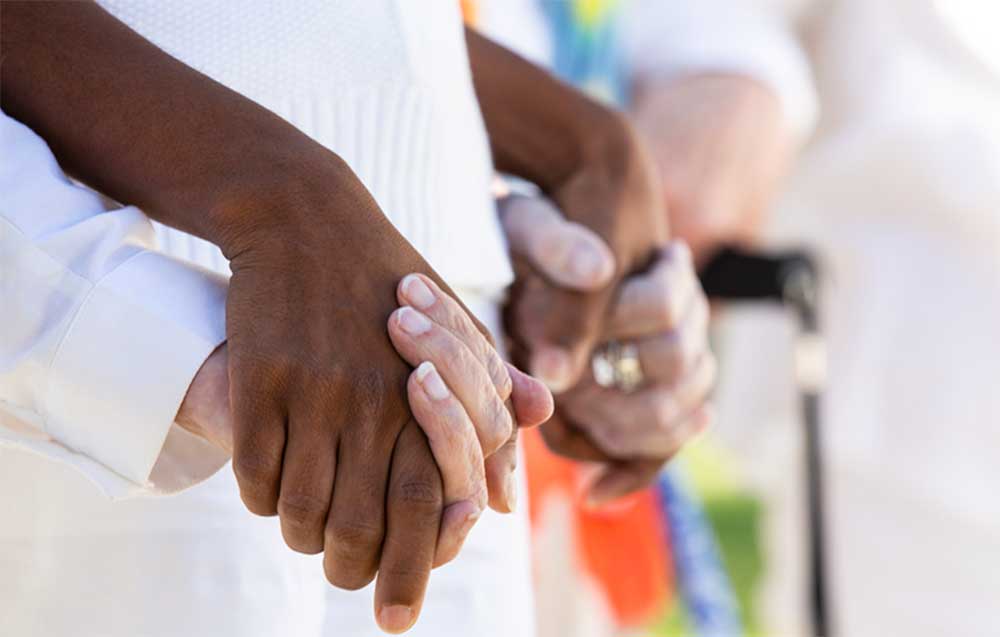 The commemoration, “A Day of Remembrance, 100 years after the Ocoee Massacre,”  ended with a formal letter of apology presented to descendants of the massacre and a candlelight procession to the unveiling of a memorial marker at Oakland and Lakeshore Drive. 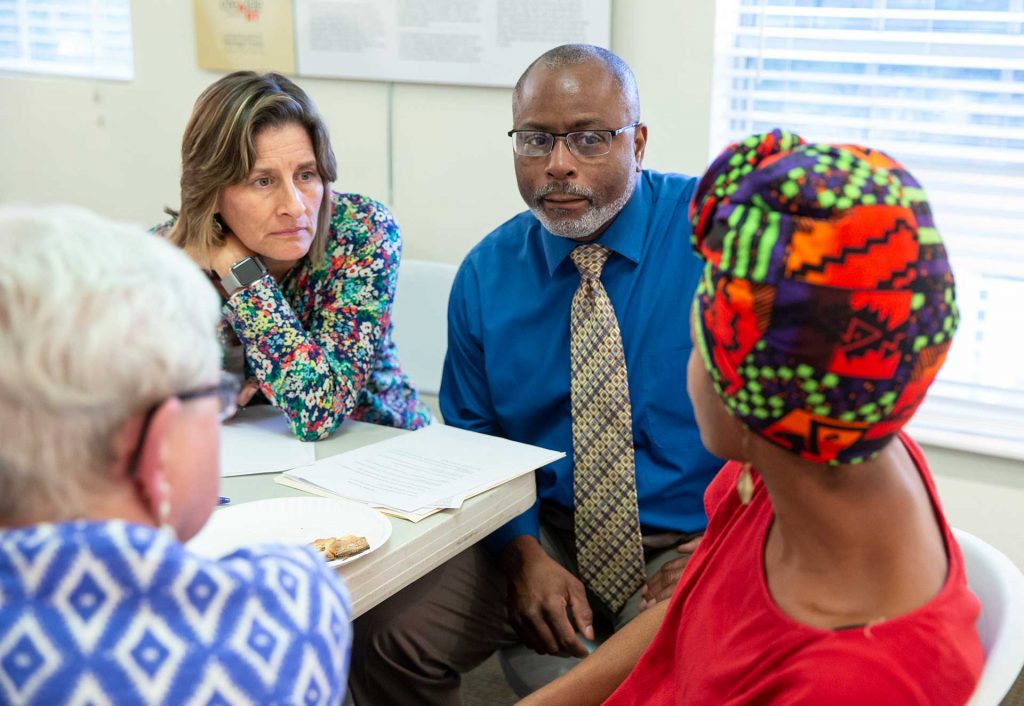 If you are interested in joining ATJ, please send us an email. We encourage everyone on our team to be an active member. 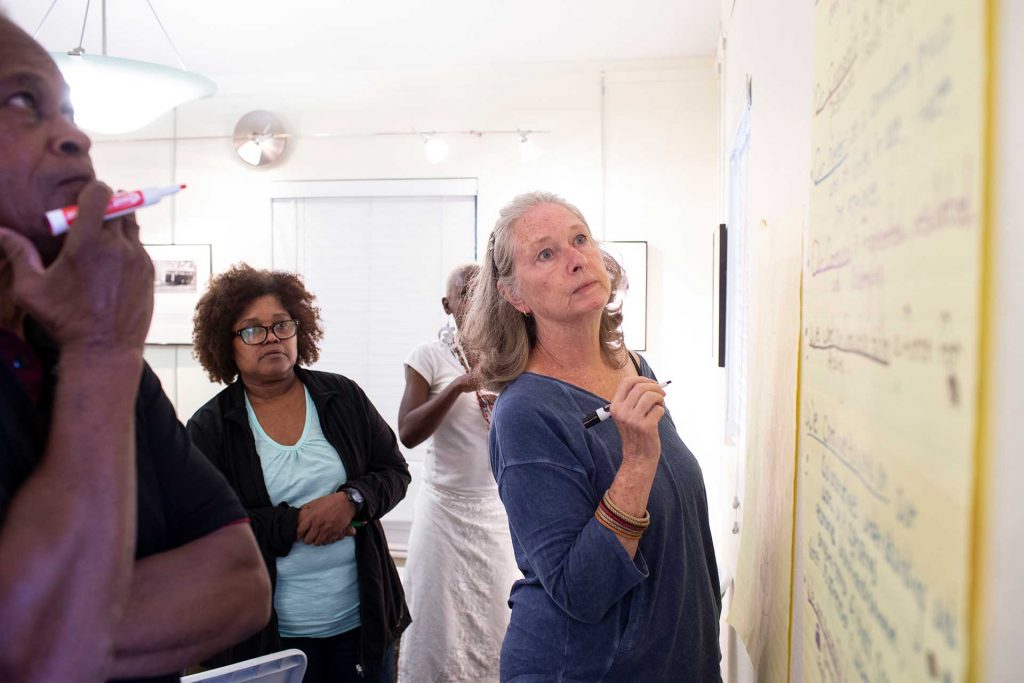 A blueprint to provide guidance for folks in other towns who want to do similar work as ATJ, but aren’t sure where to begin.

When those angry white men strung up Sam Mosely,

Glistening with a cold sweat of terror

Out on the edge of Lake City

In the same neck of the woods

Hung from a tree and then riddled with bullets

As was the fashion

Across the former Slave Belt of Florida

That deadly Red Summer of 1919

When the Black veterans marched home

From the world war

His brother’s despising of the Klan

My Grandfather’s defiant refusal to accede

To demands he join their clandestine group

(Their hooded membership the worst kept secret in Homestead, Florida)

Willing to risk the retribution

That refusal could have provoked

Retribution that could come in the dark of night

Would come to set fire to his home

With the torches they otherwise used to burn crosses

All in the name of Jesus, of course….

Was my kinsman at home that night

In this growing community to which he had just moved

Seeking a new start after his own time

In the great war to end all wars

His pride and joy

Had he heard of the deadly plans

To murder Sam Mosely and desecrate his body

Did he simply opt out

Perhaps out of fear

Perhaps out of conscience

Did he dare speak out against this malevolence?

Did he simply pretend not to know?

When news of the lynching

Spread around town the next day

Did he join in the confabulation explaining those bloody deeds

That sought to legitimate them

Talking points for which the newspapers

Would offer a semblance of credibility

Publishing in a one-paragraph cryptic blurb

Buried on an inside page

The lie they had all agreed to –

That Sam Mosely had “forfeited his life”

By “allegedly assaulting a white woman”

About yet another Black man

His accusers proceeding directly to punishment

I wonder if the purveyors

Of their agreed upon lie

Realize that those who feel the need

To legitimate their attitudes, words or deeds

That they recognize them to be illegitimate…

Fueled by fear and rage

They were rightfully protecting their property

As they saw their women and their children to be

Indeed, they told themselves,

Their very way of life was on the line

I wonder how difficult was the disconnect

That place deep inside where they knew

That what they were doing was wrong?

Was he swept away by the mindlessness

Of his new fellow townsmen

His own consciousness descending

To the lowest common denominator of the mob?

Because he shared those racist views

That saw any means

Including the use of a human body

To drive home their point

As he attended the sunrise service that next Easter

On the shores of Alligator Lake

Would he make the connection of their deadly deeds

To the Romans who executed the Jesus

Whose resurrection they celebrated

An empire who perfected this terrorist tactic centuries before

The rotting bodies they left dangling from crosses

Lining the road into Jerusalem at Passover

Including the one above whose head a sign read

“This is Jesus, the King of the Jews…”

And whose unwritten post-script included the warning

“…and this is what happens to anyone

Who would presume to be king in Caesar’s Empire.

Do not challenge the imperial order.

We will crush you.”

That morning when they sang

“Were you there when they crucified my Lord?”

How many truthfully raised their hands?

Was he there that night?

A century later, his great nephew –

Of the truncated life of Sam Mosely

All the while knowing

There is no way to answer that question now

His children all deceased

But even if my kinsman was not there

There were enough angry white men that night

To engage in an atrocity

And even as I ponder the question at hand

The queasy feeling in my gut

Had our roles been reversed,

Would I have been there, too?

For now my calling is to tell the stories

To let the Sam Mosely’s of our common history

Be lost to us

Erased from our collective memory

Repressed from our collective consciousness

Released from our collective conscience

A wise rabbi once said,

“Remembrance is the secret of redemption.”

This day I wrestle with my soul

Pondering the role my kinsman

But even as I do

I refuse to let death have the last word.

This day, I insist that we remember

The Sam Moselys of our state

Taking up once again

The long, hard work of redemption

Of our collective soul.